Back on Saturday July 28, I was looking forward to CanFurence that was coming up the following weekend, as well as being ready for another social event on the Sunday (July 29). Little did I know that the entire rest of my summer was going to be screwed up that day.

I was out getting some groceries, getting a new set of keys cut for the condo so that the person who I would have coming to check in on Cylia would be able to get access, and then going to find some other costume stuff for the new lynx I had debuted back at AnthroCon.

It was at that point that I came around a corner after parking my car, and tripped over a curb/lip sticking up in the middle of the sidewalk. 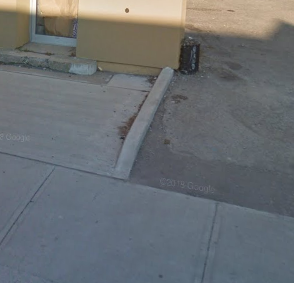 I went sailing over that curb, landed badly, scuffing up my right forearm, left palm, left knee, but most severely; landed back on my left foot. After a few minutes I was able to pick myself up, but I could barely put weight down on the foot. I aborted my costume clothing search and headed home. I was able to hobble on the foot enough to get back to my condo. But once there, I started feeling shivery, teeth chattering; signs of getting shock from this ordeal. After mulling it with some online folks for a while, I decided to head to the nearest hospital, making use of Uber to get me there.

I was processed and actually seen very quickly, getting an X-ray of my foot. However, despite following the instructions of a nurse, the ER people ‘lost’ me for an hour, as I had been directed to wait in a specific room (which is where I was), and they expected me in another general waiting room. Nothing was broken, and it was considered to be a bad sprain. I was given a pair of crutches, an anti-inflammatory shot, and sent out on my way… heading back home again using Uber.

The next week I was able to work from home, since I really could not walk well at all. The following week I went in a couple of days, but it proved hard enough that I worked from home for another week. I’ve since been improving and getting physiotherapy for it the past three weeks (including today), and I’m feeling reasonably well enough to do costuming at FanExpothis weekend.

I’ve still got some pain in the foot, and it’s going to take a few more weeks until it’s back to near 100%.

But that small trip and fall pretty much torpedoed the whole plans I had for late July and all of August. It’s not like I even saved that much from not going to CanFurence, as I’ve also had to shell out money for new shoes (hiking shoes, which don’t bend as much near the toes, which helps that part of the foot heal still), and a pair of ‘hiking poles’ so I can use one of them as a stick for support as I’m walking around. At least with using the stick/pole, I’m getting a seat every time on the subway!

After all of this is healed, I’m still going to have a big scar on my forearm as a reminder of this. 😛